Getting ready for sea.... 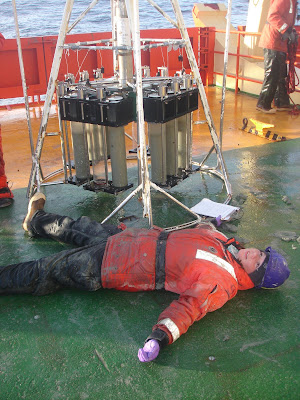 Getting ready to get back to sea - in less than 2 weeks i'll be flying south for the summer.....yes, I know that's not quite the right direction! Spring has most definitely sprung here too, so it's going to be quite hard to leave it behind and head back into the depths of winter. It'll be good to finally get down there and throw off the bow lines, be away from land, and the hassles that go with land, for a while. I love going to sea, it's an enormous sense of satisfaction to see a project go from an idea in your brain to proposal, to funded and finally to reality. See the samples we only dreamt we'd get and the secrets of the sea they hold. Of course it doesn't always go the way you first planned, but there's not been a single cruise i've been on where I haven't learnt something new, and that's exciting in itself.

This last week has been hectic, lots of things going on (from proposals, reports and green card paperwork) and it's not going to stop until I get on that bus to Boston on the 2nd. I had hoped to get out in my tent for a night before I left, but it rained last weekend, and this weekend looks the same, so it's a no go, it'll just have to wait until I get back!
Check out the cruise blog if you have the time and let me know what you think!
Posted by RGW at 2:06 PM No comments:

So the government did not go into shutdown, and a big sigh of relief was heard from over here. Of course we can't speak too soon, as although no shutdown is good, they have agreed to some massive budget cuts, and at the moment, no-one knows where those cuts are coming from. We'll find out soon I guess.....
This weekend has been amazingly productive and lazy at the same time. Despite being highly jet lagged all week and having a tough time pulling myself out of bed, this weekend i've woken up at 5.30am on both days....argh! But I have managed to reorganize my "living room", as much as I can right now without shelves, couch etc., which are just going to have to wait until I get back from the Antarctic and have a few more paychecks under my belt.
I tidied the spare bedroom, as with the potential for Kathy to come visit, and hopefully Diane visiting shortly after I get back in June, I bit the bullet and ordered a bed for that room - the mattress has arrived, the bed should get here sometime next week. I did also manage to make a decision and order myself a dresser, which is much needed to get the piles of clothes that cannot be hung off my floor. I always seem to move from house with lots of shelves to a house with lots of hanging, and that is true here, there is very little storage compared to my little place in Hawaii, which is amazing really. But I finally feel like i'm almost organized enough I can find most things and won't drive myself crazy when I come back from the Antarctic staring at boxes.
I also did a little drive around houses for sale this weekend too, there's a bunch on the market right now, and although i'm not quite ready yet (esp as i'm headed out for 2 months really soon!), it is fun to look, and it's good to drive around. The snow has mostly melted (though i'm told more is on the cards) so everything looks different, it feels like i'm discovering for the first time again. It's been a gloriously sunny few days as well, the kind of days that made me fall in love with New England way back when. Ahh. Why am I headed back to winter in Chile?
And, I had a first today too. I went to check on Chris and Gabby's house (they're on vacation) which is just up the road and drove past a pond and saw this little fella. So cute!
Hope you all have a great week! 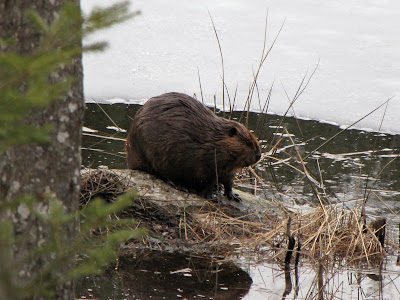 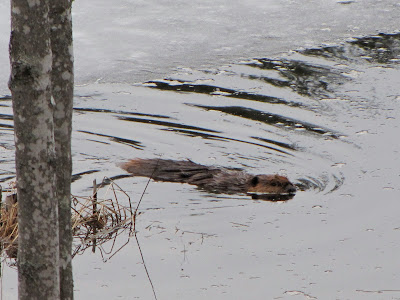 
I've been back for 4 days now. Even though my life is far from organized, I was pleasantly surprised at how much I had the relaxed and calm feeling of being "at home" pretty much as soon as I walked through the door. Which considering I had such a fantastic visit to Hawaii was nice. I didn't make many "good friends" out there (the kind you hang onto forever), but this trip really reminded me of how much I miss those people. Despite that, Maine is home, and it feels good to be home. Even if only for a few short weeks before I head south on my Antarctic cruise (and man what a bear the organization of that is turning out to be.....but i'm going to spare you there....).

The big news here of course is that the government could go into shut-down mode tonight if they don't come to a budget consensus soon. I'm not a federally funded employee, so i'm not worried about not being paid, but the majority of my research grants are federal, not to mention the several I have in review right now, that will be in stasis until this gets figured out. Our cruise to the Antarctic is federally funded, and though we think we're all okay, impacts are not quite certain right now. The biggest impact is with my collaborators - Kathy from Woods Hole, who works for USGS and Bob in Alaska, who works for NOAA could well be in limbo next week, without pay. If the government goes into shut down, they're not just told not to work, they are physically locked out of their buildings, out of their email, out of their phones - they are literally not allowed to work.

So i'm in two minds. Kathy and I have dreamed up a scheme that if this really happens she's going to truck up to Maine next week and come and hang out up here. We'll work on some "non-USGS" things together, and it'd be great to see her. I even went out and bought a bed and bedding tonight for my spare room just in case (so that pretty much guarantees it's not going to happen....). On the other hand though, Bob being locked out of his office means our live corals have no-one to look after them, all that hard work put into collecting them could go to waste. They're doing well so far too, but the big plankton bloom has just begun up there, meaning the water gets thick and sludgy, clogging up the corals - in the past this is the time of year the live corals suffer and often die if not looked after carefully. So we're concerned.

All this talk of government cut-backs included a large cut to science spending in the US, but it seems right now as if the government has conceded on most things except funding for Planned Parenthood - an organization here in the US that provides reproductive health care for low income families. This is the most stupid debate to me, coming from the UK, where both healthcare and contraceptives are free, as they should be. You should never have to decide between contraceptives and food in my opinion (~$10-$20 a month for the cheaper ones, with insurance), but many do, which is why Planned Parenthood, who charge less, is so important. Why is this even an arguing point? The Tea Party stresses it doesn't want federal funding to go to abortions and that is why it is not conceding, yet abortions provided by Planned Parenthood are not subsidized by federal money, those are charged at cost, so it's not even a true statement. What's more, if funding were increased for Planned Parenthood, to a level where contraceptives could be made free to those on low incomes, we would save a considerable amount of federal money not supporting single unemployed mothers and their children, likely more savings than shutting down the service. But we don't want to encourage people to have sex do we. That wouldn't be very republican. I love being in this country, but some things drive me nuts, this week has been full of them. Let's hope Obama doesn't back down on this one.

So in the end what's happening with science spending? I guess we'll find out soon. I hope I haven't just found my lot in life to have to give it up because science funding has tanked.....
Posted by RGW at 2:51 PM 1 comment:

Last day in Hawaii, boy 5 days really goes fast. I tied up all my loose work ends and Jackie successfully defended her Ph.D. on friday. So that left today to be a day off, and a grand one it was. It started with little Hannah's birthday party on the beach and continued with friend Laura going around a few bars sampling the Mai Tai's, sitting on the beach and going for a swim. Was much needed. Tomorrow we have plans for a nice breakfast, a little shopping and a nice lunch before I get on the long plane ride back to Maine.
It's still unclear if I have to shoot up to Canada to get a new work visa in the next 3 weeks before I head to the Antarctic, i'm sincerely hoping not, but nothing like the International Office to mess up plans to do some decent lab work before heading out.