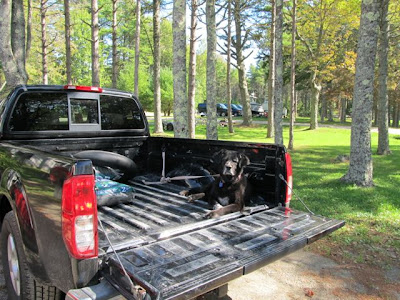 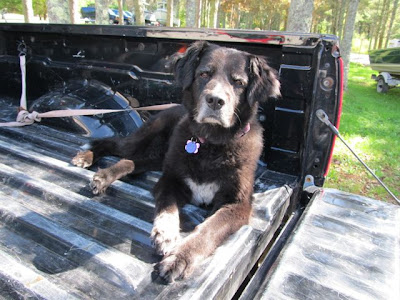 Barkley, relaxing in one of her favorite spots, the back of our friend Chris' truck at work, watching the world go by.

A much needed relaxing weekend was had. Saturday saw catching up with errands, cleaning my office and going to a SEA party in Rockport. It was nice to see old friends again, and nice to get out! Sunday was even more laid back, grocery, a walk at our favorite trail, then Chris and Gabby over for dinner. I needed a slow weekend and definitely feel refreshed for it.

The next few weeks are going to be hectic, in a good way though. Sometime next week Jenny, Doug and the kids are coming to visit! They're on the east coast visiting family and will drop by to stay for a few days. I'm totally thrilled to see them again, then on friday Laura G. comes to stay for ten days - and that's pretty much 99% of what I miss about Hawaii over here in Maine, so i'm going to be in bliss! The week after next is the AAUS diving meeting here at the Darling Marine Center and in Portland (both Laura and I are presenting), and then it's the beginning of November and Dad and Sanchia are coming to visit. So it's all go, in a good way...:0) It does mean i'm running around a little this week trying to get things squared away so I can spend some good time with friends.

As for Barkley, she's doing great and still seems to be loving Maine. Our 6yr old neighbor has decided she's the best thing since sliced bread. For her part, she's putting up with it, was very proud of her today that she didn't snap at him when he ran at her full speed. She's doing really well.....:0) 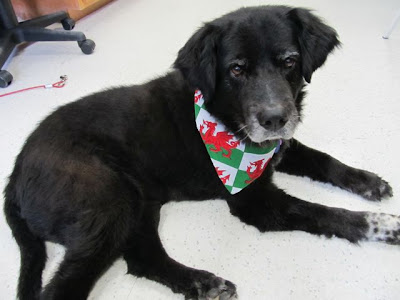 It's been so nice to be back from Alaska, and so nice to see miss Barkley again. She's really a hoot, I love having her around, makes me laugh on a daily basis. This week has been a bit crappy at work, so having someone to make me smile has been awesome. :0)

Heading back to Maine

A whirlwind 8 days in Alaska, and i find myself sitting in the Seattle airport again, waiting for my flight back to Boston (via Chicago). The trip as a whole was fun, it was great to see Bob and Michelle and Jennifer again, and I did get to see my first Alaskan Bear, as well as got to enjoy a little of Juneau yesterday afternoon.

The cruise though was pretty much a bust - we managed to sample half our colonies, but that in itself was a miracle. Our first dive all three of us went in the water. We were expecting poor visibility because of the time of year (glacial melt tends to be murky), so had already planned to go in making sure we held onto each other until we got to a coral, then break off do what we needed to do, then rechain to head to the next one. Despite pretty good visibility to 15ft, a wall of silty blackness appeared at 32ft, making it impossible to see even past my elbow, and the reflectivity of the silt meant you couldn't read your gauges, no matter how close you had them pressed to your mask. Jen and I managed to stick together, but we lost Bob within 5 minutes and headed back to the surface.

The visibility improved a little over the few days, making it possible to at least read your gauges, but if you lost contact with the fjord wall or your buddy you were done. So we'd sample by heading to an exact depth, then moving hand over hand across the wall, hoping to bump into a coral colony, and hoping it was one of our tagged ones. Frustrating to say the least, and since both Bob and Jen said it was the worst they had ever experienced, and they have a lot of experience, i'm glad to say I hope never to have to dive like that again! To say it again, we were incredibly lucky to get the samples we did.

Some photos from the trip below. Barkley has apparently been having a ball with Amy, Peter, Stuart, Jackson & Farley all week, and i'm sure is not going to want to come home tomorrow. I can't wait to see her though, i've missed my fuzzy friend!

Back in Alaska - arrived here on Sunday night - ready for the last in our series of diving cruises. Weather is not quite what it was last September, a little wetter to say the least, but still, Alaska holds a place in my heart. The last two days have been hectic, getting supplies, chemicals and dive gear ready to go, and tomorrow early we head out down the Gastineaux Channel towards Tracy Arm fjord to collect Red Tree Corals. No cruise blog this time, i've just been too pushed for time, and we have no internet or phone coverage while we're out there anyway, so it's never quite the same. So wish us luck, and we'll be back in "range" on Sunday!

Despite a hectic packing and organizing schedule, we have managed to go by the famous Mendenhall Glacier trail in search of the mysterious Alaskan Bear (which I have never seen in any of my three visits to Alaska!). Some pictures of the last 2 days....