Some serious proposal writing to do. Things have been way hectic, but good, if you know what I mean. I made a "To-do" list today that is 3 pages long (that's letter size pages), so I need to knuckle down and get through that before I can come up to breath.
I need to find somewhere to live, cabin fever hit yesterday and I was so glad I had to go to Portland to get my drysuit (new seals) and had the excuse to leave the campus. So apologies for being sporadic, but it's going to continue for a wee bit. And no, I haven't been running here yet, the cold is okay, I think I can handle that, but it's literally been snowing on everyday I would even have considered it. Running in the cold is one thing. Running while it's actually snowing is a whole other ballgame and I need to build up to that!
It was so cold in the lab today that at the end of what I could stand I went out to watch the sunset at Pemaquid Point. Little car may be in shock at the weather change, but boy does she have a good heater! Hope all is well in everyones world! 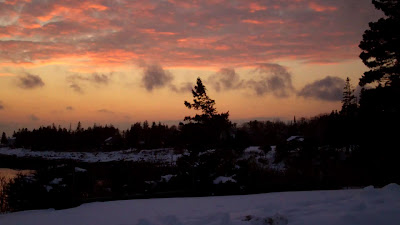 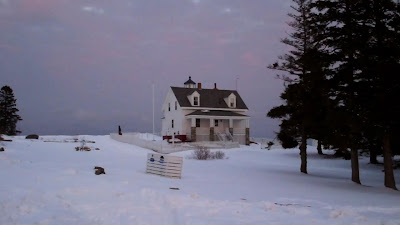 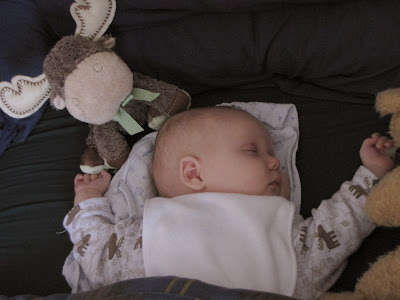 Wowsers, how did you get to be 2 already! My little Niece Lucy is 2 today, I haven't seen you since you were this big, I hope to rectify that this year. Skype is a wonderful thing, even from all the way in the UK, i've got to talk to little Lucy occasionally (so much easier now i'm on the East Coast) and watch her bounce around the house with babies and bears in tow (and the odd shark and ray!), and love that she can say Aunty Rhian.

Little car got her Lobsters 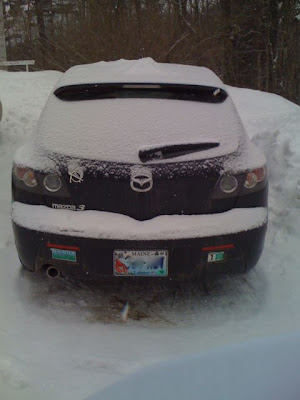 Plates finally changed, from Rainbows to Lobsters, she's now officially a Maine car (so maybe a Snow Belle). This is the first "life" thing i've accomplished since moving here so i'm feeling a little better about life in general. Wok so far is going well, lab is almost finished, though it'll be a little bit before the shelves are up on the walls as they have to get those made. It's getting there. Next step, should probably find somewhere to live around here soon....
Posted by RGW at 7:19 AM 1 comment:

Weekend on the Cape!

Spent this weekend on Cape Cod - a flying visit to drop off boxes to be loaded into the container headed to the Antarctic. Got to catch up with a few people I didn't catch over Christmas, so that was awesome. I'm pooped, so here are a few photos from Friday onwards. 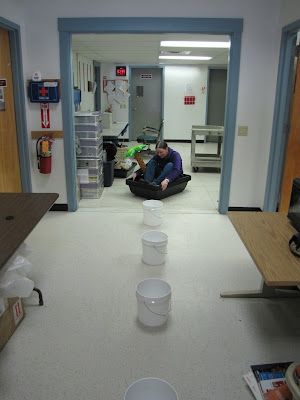 Practicing pre-sledding using our trawl sorting tubs....
I've had a rough few days with just way too much on my plate right now. I really needed a pick-me-up, and I got one, in the form of a very nice dive this morning and my teaching evaluations from my undergraduate course in Hawaii!
I look forward to these evaluations, mostly because some of them are usually pretty funny, but also because I do WANT to be a better teacher, so it's important for me to see what the students think. I'm not teaching here in Maine for the short term, but probably in a few years, so it's good to get feedback and have some time to evaluate.

It was definitely a more interested group this year than last, which made it nicer to teach, but I have to say, I wasn't prepared for just how NICE the evaluations I got were. Literally, other than the usual smattering of "go slower", "material too hard", "material too easy", "turn up the lights" comments, there was nothing major.

So for my 3 Things Thursday, I thought i'd give out a selection of my favorite comments.......more than three, but i'm going to group them....:0) Bare in mind, all spelling, capitalization etc. is true to the students comments (which we get typed up and anonymously).

1. The Good - "Biology of the deep-ocean was pretty sick", "have Waller make the slides for Measures and DeCarlo, haha", "it was awesome. No improvement necessary", "SHES VERY NICE ☺", "AWESOMENESS! Love your teaching!", "★★★★★", "A++, so interested in her subject and loves what she does", "thank you for reminding me why I want to be a marine biologist...:0)"

2. The Bad - "Exam hard as FOOOK", "STArT AT A HigHer LeveL of Bio, To RudimenTary iN Beginning", "Sweet Lady, put effort into presentations" (that one made me laugh out loud...:0),

And one of my personal favorites for an Oceanography course - Which aspects of the course did you like the best? "The underwater portion"

In case I needed confirmation.... 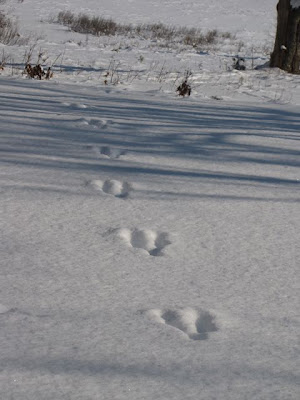 It's been a stressful and hard week, lots to do, lots to learn on this diving course, and lots more to do still in life and work (reregister car in Maine, find a house, write 3 proposals in the next month among many). I was treated to moose tracks in the snow, right outside my apartment this morning.
Just in case any doubt had crept into my mind
I am indeed home
Posted by RGW at 3:07 PM 2 comments:

Some pictures of the aftermath of Wednesday. It's still pretty white here, the temps are such it's going to stick around for a while! 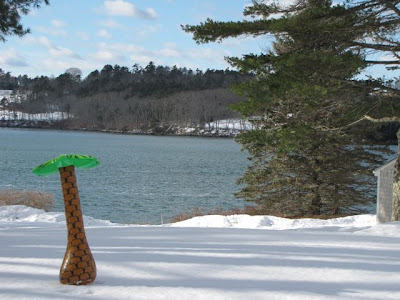 1. I'm loving the Maine pace. The boxes are starting to drive me barmy, but I know that's only temporary. I've managed to get a ton done since I got here work wise, compared to what I could have got done in Hawaii that is.

2. My major concern is still salary. I'm really worried. But I have found other things to apply for, so that's a good thing. I just need a whole ton of luck and maybe something will pan out...

3. Okay, so I haven't been running since I got here. Last week was mental and this week diving has been #1 priority. I need to sign up for a race, that usually motivates me enough to go....
Posted by RGW at 9:05 AM 1 comment: 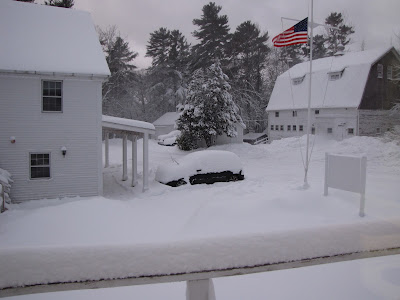 This was the day's accumulation - and it's still snowing! Yeah!
Posted by RGW at 12:54 PM No comments: 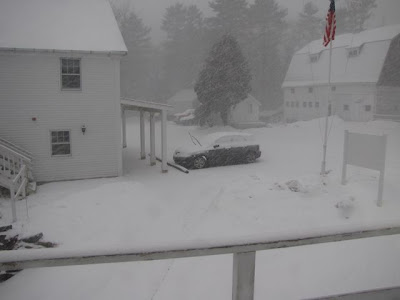 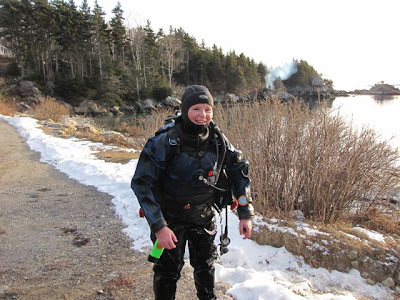 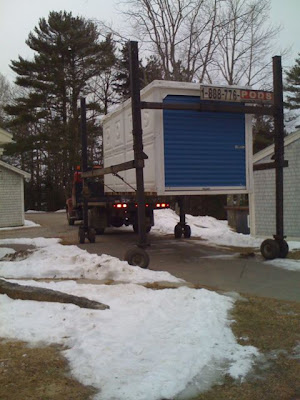 Saturday morning the empty POD was picked up - yay! That's closure on that end. Now if only I had somewhere to put all the boxes! 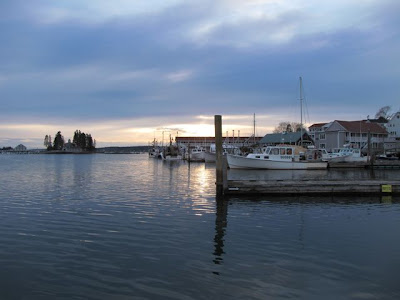 Saturday Christian and I went over to Boothbay Harbor to take a look and have a late lunch. Was really pretty! 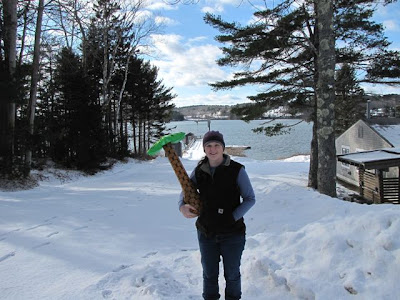 And all is well. 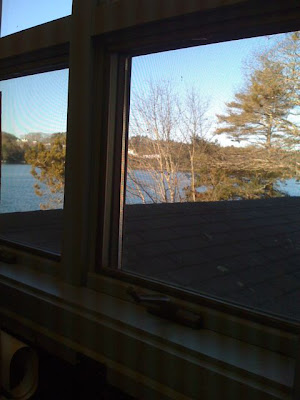 Can't say too much than that. I've been here just over 8 days now, and i'm loving it. It's been busy, but in a different way from Hawaii, busy in that I have a lot to do, but not overbearing. Things are much more laid back here, it's the quiet season, the perfect season to move into the lab in, as many are not around. There are no undergrad courses in this semester and many of the faculty teach up in Orono this time of year, there have literally been just a handful of people in the lab this week. I'm still surrounded by boxes, and have no idea where any thing is at any point in time, but i'm told my main lab will be ready next week, so i'm hoping that will change soon.
My technician Christian arrived on Thursday for ten days of helping to unpack and doing this dive training with me. We had our first dive day yesterday, the pool day and went through the fitness test and some basic skills (both in a wetsuit and drysuit). Fitness test went fine, 400m swim in under ten minutes (9 mins), 800m snorkel in under 17 (14 mins), 25yrd underwater swim (okay, so I had to do this twice to get it!) and a 15 min treadwater. It was good to get that out the way. I'm not feeling terribly pool fit right now, so was a little worried about it, and I won't lie, it wasn't easy!
So today we're having a down day, i'm catching up with some things, maybe a little unpacking, some laundry. Christian is catching up on sleep after so much travel, maybe we'll take a wander and go and look at Boothbay Harbor later, haven't been there yet. It's just started to snow too - fun! Tomorrow it'll be starting to unpack so we can repack boxes for the Antarctic cruise, but nothing too hectic. Then Monday we start diving in the ocean - brrrrrrr! Hoping to get 2 dives a day all week in, so it's going to be a busy one, but I need to do 12 total and a whole bunch of skills before I can go to Alaska in March, so it'll be worth it - eye on the prize!
Some other sad news is that Barkley is not arriving next week. And it might be on hold indefinitely. There are concerns as to her ability to fly, trying out some different drugs, and just her general wellbeing. I'm not sure what's going to happen, but hopefully soon we'll be reunited!
Posted by RGW at 5:15 AM 2 comments: 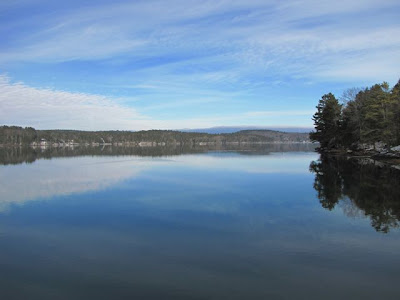 Work
I thought about a category for work this year, as it's an important part of my life. I love what I do, it has some pretty big ups to counter those really low downs that have unfortunately prevailed recently. This year is a tough work year for me, so maybe goals are not good. I've moved, have to meet everyone, get set up again, figure out a new (to me) system, find those local grant places again - it's a lot of set up. And I have a pretty busy year already - March - Alaska (5 day scuba cruise); April - Hawaii (student thesis defense); May - June - Antarctica (5 week cruise). I need to keep writing papers (and have a ton I could write if I just had the time!), I need to keep writing proposals (and get them funded....sigh) and the balance between the two is a hard one for me - papers get me recognition and advancement, proposals keep me alive with salary. Let's just say I need to do my best this year and work my butt off, I need to set a good impression at my new location and show i'm worth keeping around. This is a reason I haven't put too much in the recreation category this year, work needs to be my focus.
So those are my goals for 2011, nothing too groundbreaking this year, in many respects I want to play it by ear and just keep it moving forward. Hope you all have a good 2011!
Posted by RGW at 3:40 AM 1 comment: 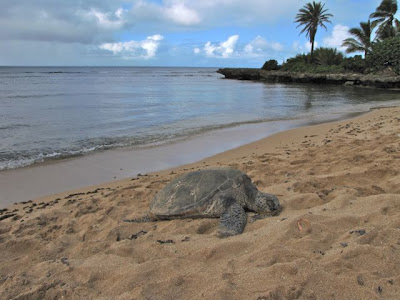 I can honestly say I didn't succeed fully on any of these and it makes me so mad. I didn't pay down my debt at all, I didn't save for a hiking trip but I did get significantly less fees in 2010. We had a pay cut and then I had to drop to 60% salary for my last 4 months in Hawaii, I was barely scraping by there on 75%, 60% just meant the debt kept rising, then moving on top of that, and Christmas, my banks are a mess. Sigh.

- I got a job in Maine, moved my lab, moved my house, moved my car, and finally moved myself (just missing the dog, and she'll be here in a few weeks).
- I wrote 11 proposals, had 4 funded (only one of which had any salary on for me),  5 not funded, 1 the whole call was pulled out and one we're still waiting to hear.
- Had 6 papers published (or to be published shortly in 2011)
- Went on science expeditions/work trips to Canada (ancient DNA) and Alaska (Glacier Bay National Park and Juneau fjords) and went to the Deep Sea Biology conference in Iceland.