Took it out this weekend twice - was awesome! I'm so happy we can get out on the water together - she was a little nervous on day #1 (but still sat through 1hr 45 of paddling without complaining!), but today she was awesome, even laid down to go to sleep on the paddle back - yeah! I see some fun times ahead this summer! 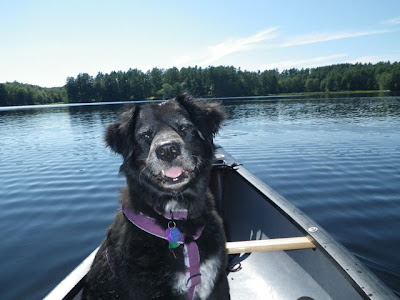 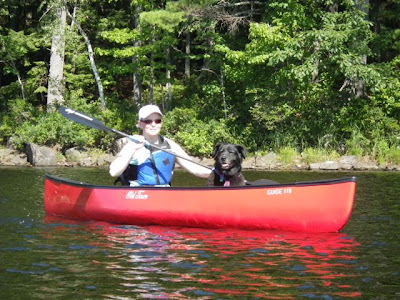 I finally got around to downloading the photos from a diving trip to Monhegan Island I took with the UMaine dive group almost a month ago! It was a great trip, such a beautiful place to dive. And the best bit....i'm going there again on Monday! This time to learn Nitrox diving and to do some deep dives to see what we see - yeah! Maybe i'll get around to downloading the photos from Monday a little sooner! All photos taken by Chris or Mike! 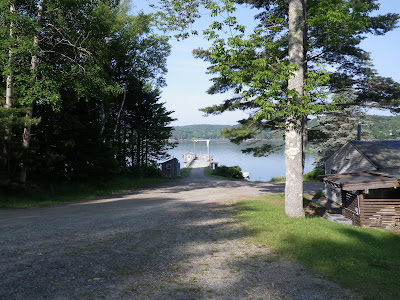 In an effort to blog more, it's back with three things Thursday! It might be 9.30pm on Thursday.....but it's still Thursday!

1. Went up to Orono yesterday, had to pick up some more boxes of books and teaching material of John Dearborn's, a retired faculty member here who died this winter. He was one of the greats in Antarctic Research, particularly in reproduction and development, so i'm very sad we never overlapped at all here in Maine. He'd been retired for a few years, but still remained active and kept quite literally everything. His daughter has given me much of his Antarctic collection of books, reprints and teaching materials, which will be so invaluable.

2. While up in Orono I bought Barkley a present. You'll see what it is by the end of the weekend, but i'm hoping she'll like it.

A weekend in the Whites

A weekend trip to the White Mountains is never enough, it always fly by way too fast. This was the briefest of visits too, I probably should have pushed it and went on friday night instead of driving up on Saturday, but oh well, a short visit was probably enough for a first camping trip with miss Barkley anyway. We had a great time, and Barkley was a trouper, both on the trails and in the tent, I think she enjoyed herself, and at the moment is asleep exhausted on her bed in front of the TV.


The hike was a great end to a great day and we've scoped out some great camping spots for next time too! Evan's Notch is just stunning, and being in Maine it's only 2 hours away, so i'm hoping we get back at least once this summer.
Posted by RGW at 1:27 PM 1 comment:

Heading for the hills...

It's been a bit since i've blogged sorry, to be honest, the last few weeks have been a bit of a bust, so I haven't had much good to say. To start with the good - Barkley is awesome, I am adoring having a pup around and I think we were made for each other; I love Maine, I am really enjoying being here for a good period of time; and I still love  the Darling Marine Center, I am so enjoying being around in the summer, so many people, so many students, so much good science going on.

And the bad, funding just sucks right now, so i'm not sure where my life is headed. Makes it hard to blog. I've had my three big proposals submitted this year rejected and i'm not sure where to head next. One wasn't unexpected, but i've had good vibes from the foundation I submitted it to to resubmit next year, which is something. I didn't get a second year of the Alaska project funded, which is painful. We've found such great things there that need the extra year of observation so it's frustrating to say the least.

But it's not just the frustration of rejections, you need a thick skin to get through those and I mostly have the ability to dust off and try again. If science funding was what it was a few years ago i'd not be too worried about 3 big rejections, as i'd know something would come along. But it's not. This many rejections though begins to erode at the confidence and i'm really begin to question my ability to do good science. I think my general malaise comes from the fact that I do really like it here and want to stay, and i'm now just uncertain how to make that happen. I'm usually happy to keep on plugging away at proposals, but with major funding cuts to science it's all becoming pretty depressing.

The next immediate step for me is a paycut, so that will start next month - i've moved, I have furniture and it's still much cheaper here to live than Hawaii, so I can swallow that now. It's not what I want as I want to build up enough money for a house deposit and that will have to stop, but at the moment it's just survival. I can pick up some teaching next year and have been talking around getting suggestions for smaller pots of money - all in all, it's been mentally exhausting. With some creative rebudgeting, teaching and hopefully a bit of luck for a little more, i'm good through the end of next year - which sounds good, but my creative rebudgeting is not going to help my science get done (other than keeping me in a job I suppose).

I know whatever will work out will work out, it always does and so far i've been lucky. I think i'm just ready to settle and have this instability stop. I'm applying for jobs, but it's lackluster, as I really like it here and don't want to leave. It'll be the hardest decision ever if that happens.

So that's the scoop, i've not been into taking photos to post and I don't like just posting the bad, so it's been few posts instead. I'm about to head to the hills with Barkley tomorrow to do a camping and hiking trip, see how she likes sleeping in the great outdoors. I need some outdoors time, and at the moment we're socked in with oppressive heat and humidity, so some elevation will hopefully provide some much needed relief. I'm looking forward to getting in my tent for the first time this year - yeah!
Posted by RGW at 3:06 PM 1 comment: 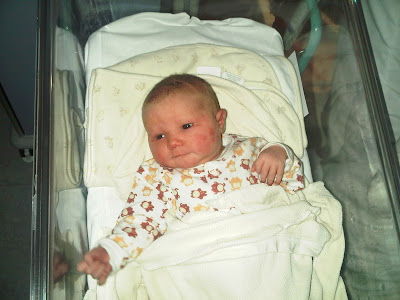 Welcome to the world little Emily Jayne - can't wait to meet you, I hope it'll be soon!

A quiet and relaxing weekend all around here. Saturday saw Rod and Kathy drive up for the day with a washing machine in tow - I can now do laundry - yeah! I still can't believe they came up for a day, I really do know some simply awesome people, I owe them big time for that one. Sunday saw a nice walk with Barkley followed by a day of sitting by the pool with friends and a few games of Bocce in probably my favorite Maine pub to date. Can't get a much better weekend than that now can you!

This week is a busy one. I've just hired some help around the lab for a day a week, a guy who's done some histology before and is super experienced, but between jobs right now. I'm really hoping that works out, though I know it probably won't be a long term solution, I could really use the hands right now to keep up with the mountains of general lab things that need doing. I'm still waiting to hear about a big grant, and it's totally stressing me out, rejections started coming out last week and i'm at the point of just wanting to know. I need to get my head around new proposals, and I need to keep my nose to the ground for opportunities. Basically, I just need to knuckle down more on the long term, and i've been finding that hard since I got back from sea. Thursday I get to go out diving all day which i'm excited about, and Barkley gets to go to doggy daycare, which i'm sure she is probably excited about too!

This week Diane has been here, which has been awesome! It's been nearly a year since I visited DC, so it's been super fun to catch up, and we even got out and seen some sights I haven't seen yet. The weekly routine with Barkley is going relatively well - we managed 2 mile run/fast walks on 4 mornings (friday was just a little too much!), she had a day with my friend Chris when I went to Orono on weds and by all accounts was a star and little by little she's settling in. 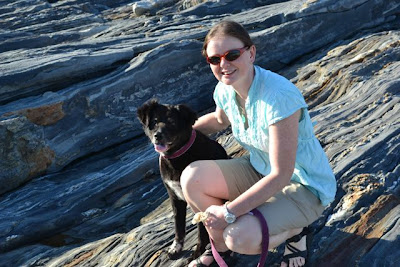 I picked up Diane on Monday and, as it was such a beautiful day and still light, we headed to Pemaquid Lighthouse for a little wander around. 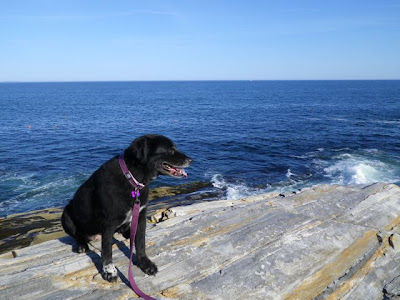 Barkley was quite the climber, enjoying the ocean and the walk. 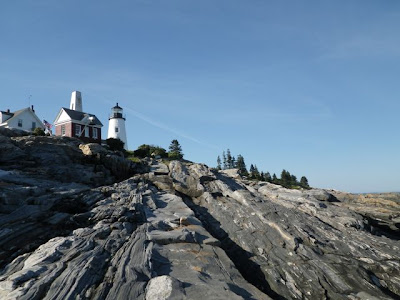 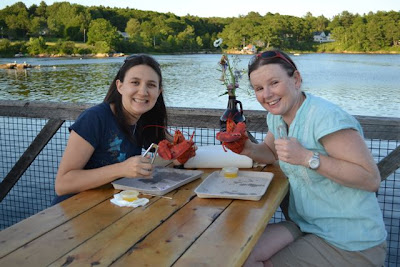 We followed the walk with some good Maine 'Lobstah' at a place I went to with Chris and Gabby on the weekend before - they're fresh off the boat and cooked right there in a big water vat and it's great deck seating with views over the harbor.....can't get too much better than that can you! 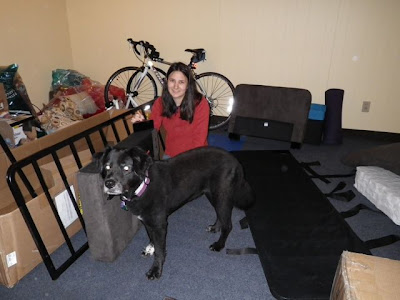 Then I put Diane to work......a bunch of furniture arrived this week, so we made a couch, desk and a set of shelves....woo hoo! 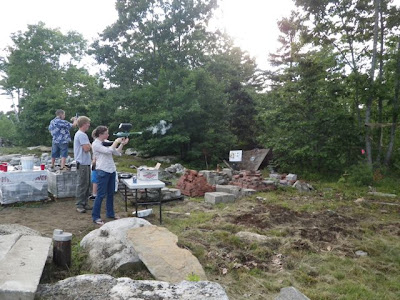 Friday saw a "hot dog festival" for charity at some friends of friends, so we went along and took part in some paint-ball sausage shooting, puppy shoe throwing and hot dog eating and beer drinking....but we left the pie and hot dog competition eating to the professionals..... 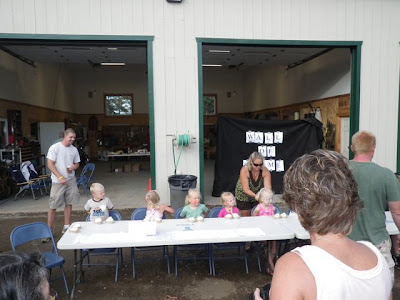 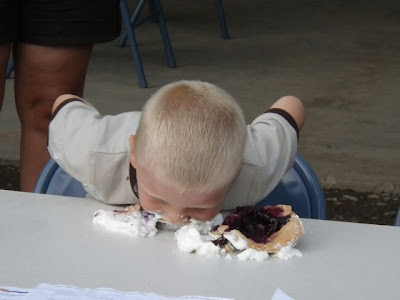 ....and especially this little fella.....the winner of the pie eating contest..... 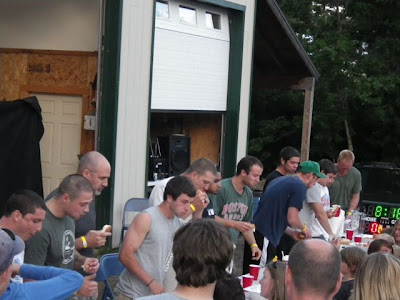 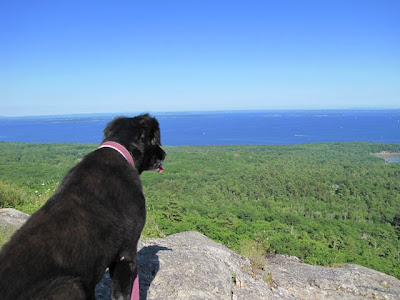 Today, after Diane finished up working we went over to Camden hills. We drove to the top then did a "short" hike around. We weren't overly prepared for this hike, with flip flops and jeans, and although it worked out to be a little more strenuous than planned, the views were more than worth the effort! 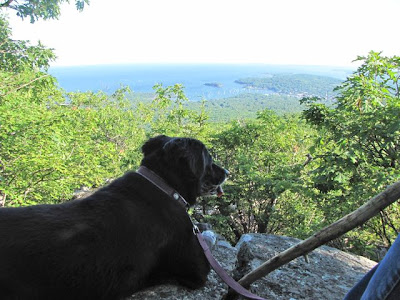 Best of all, Barkley loved it all and was a trouper. I've definitely found my hiking companion! 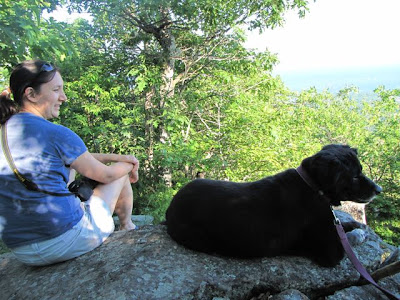 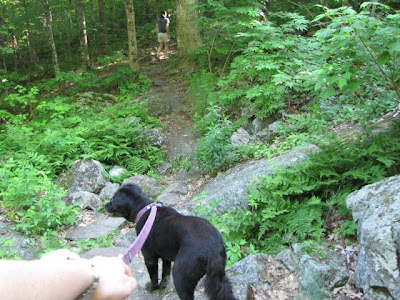