No one can say this wasn't an interesting Christmas this year! A quiet one was planned, and a 'quiet' one we got - forced home time, no power, no water, no net, meant for some fireside monopoly and quality book time! Christmas was on a Wednesday this year, and sunday night into Monday day we had a massive ice-storm come through that knocked out our power.
We were relatively prepared - we're on a well, so can't get water in a power out, and had plenty of oil lamps and candles. Alongside the propane fireplace and stove, and a small generator to keep the fridge cold every few hours - we did pretty well considering. The power went out sunday, but had come back on Monday morning. By 10am it had gone out again, and didn't come back on until late Christmas Eve. I have to say, it was super nice to take a hot shower Christmas morning!
So the rest can be said with pictures - I hope everyone had a Great Christmas too, we sure did! 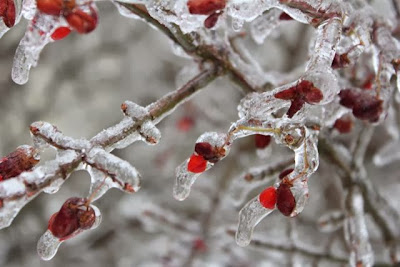 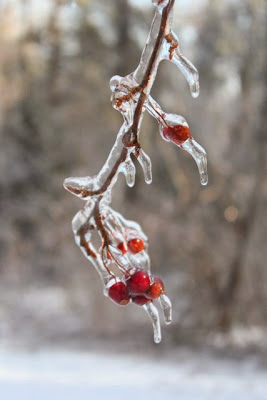 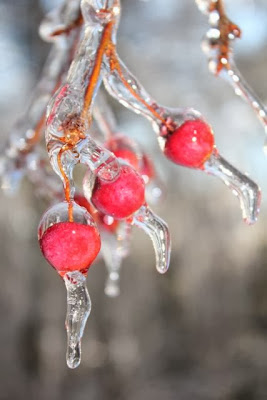 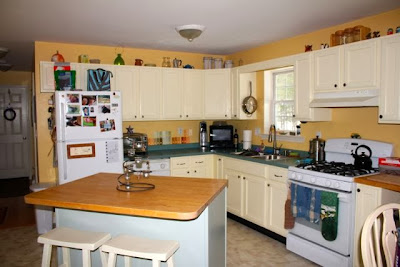 Firstly, we finished the kitchen cabinets! Complete with hardware even. They look awesome, and really brighten up the space! The next step, choosing a wall colour. It's proving pretty hard to chose, having the cabinets done really helps, but this colour will go all the way into the hall, so it has to be a colour that does both bright and dark spaces. You can almost see all the colour swatches we have up on the wall. This may be one of those rare occasions for me where we might actually have to get a bunch of small paint samples and paint a few patches here and there. 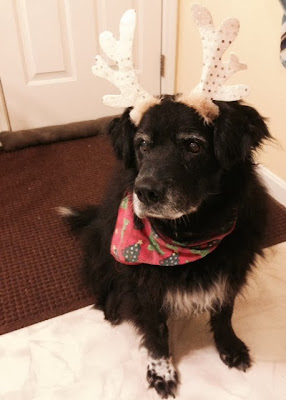 Miss Barkley says Merry Christmas! Poor girl had to have a lump removed from her chest this week, so has 12 staples that don't come out until just after new year. After a scare where they were almost certain it was cancer, when they pulled it out they're now not so sure. Given her age we decided not to biopsy to know for sure, it wouldn't change our plan for her - which is just to give her an awesome and comfortable retirement - so we decided not to spend the extra. Our vet is extremely awesome though and agreed with our decision, so on her own poked and prodded the tumor a lot more than she would normally and is now thinking it might just be a hard lipoma. Either way, it's now out and Barkley Bear is enjoying all the extra attention....and cookies....! 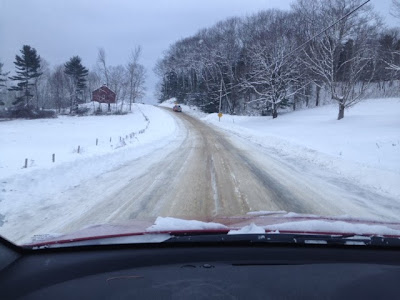 And there has been snow! This is my major road to get to work! So pretty! 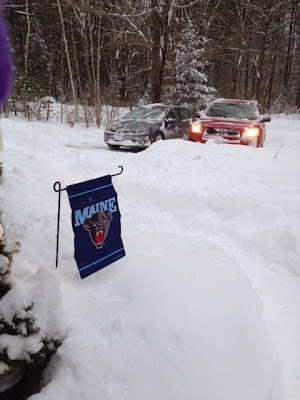 Lots of snow! We've actually had nearly 2ft already, which is a lot for December! 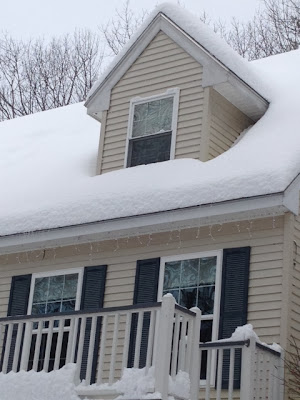 We woke up one morning to snow at the bedroom windows! 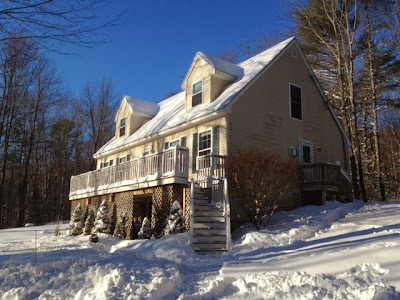 I love this time of year - bright blue skies and shiny white snow. Just makes everything look clean and fresh. So pretty.

The last two weekends we've been trying to complete a long standing project - painting the kitchen cabinets. It started with the island, which turned out great, and made us decide to give the whole kitchen a cheap facelift with a can of cream paint. Last weekend we finished the bottom cabinets, this weekend (during the snowstorm!) we started the upper cabinets. Hopefully by next weekend we'll be done!

This is all spurred on by the fact that we need to paint the kitchen walls, as they lead to the corridor, which at the moment is still just drywall from the builders this summer. But we were having a hard time deciding on colour. So hopefully having the cabinets the colour we want will help us choose a wall colour! 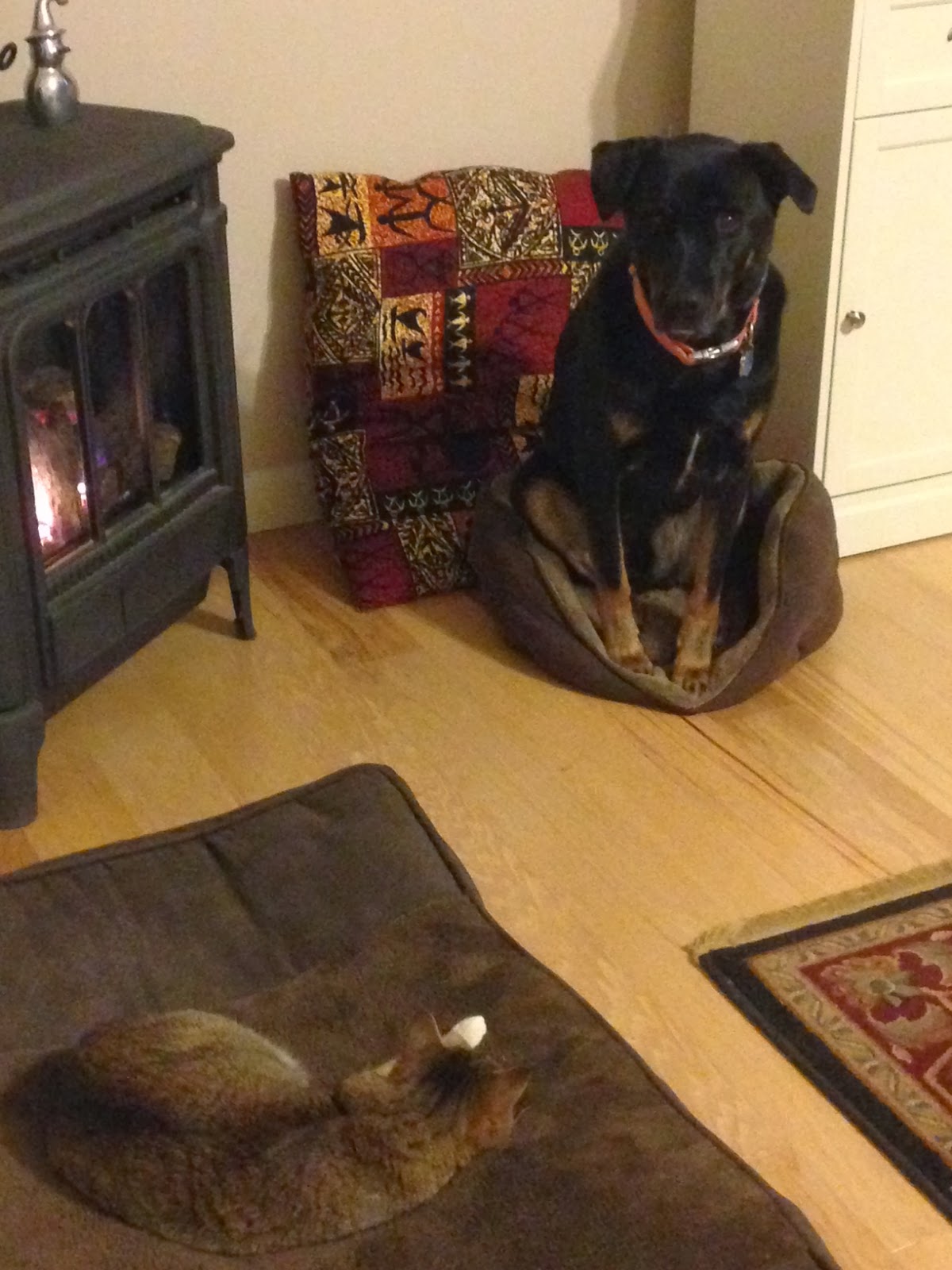 The Christmas spirit has finally struck, even though Brandon and I both have colds that just won't quit. We decided to cheer up this friday (i'd come home early as i'd had to stay in Orono overnight) by choosing our Christmas tree from a local farm. It was slightly larger than we thought when we got it home.....