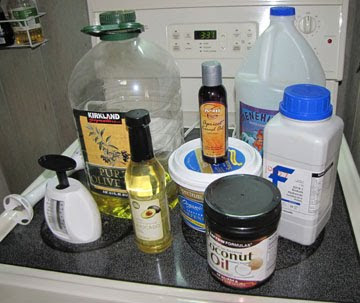 Gather your ingredients and equipment. I choose to use all organic ingredients, that's my choice, but it's not necessary and you can make cheaper bars without. You can make very cheap and nice bars just using lard and lye. I am making the "Castille Plus" recipe below and splitting the recipe into two - a peppermint-tea tree soap and a lavender soap. 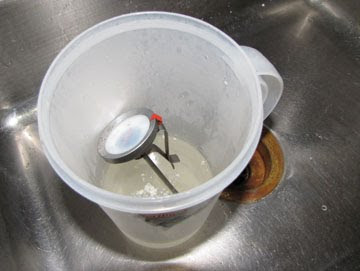 First step - mix your cool/cold water and the lye. I do this in a tall plastic (BPA free) pot to prevent spills and if you do this in metal the lye will corrode. Lye is Sodium Hydroxide and has lots of precautions in using it - use in a ventilated area, use gloves, and I like to do all of that part in the sink. I would suggest doing this after the kids have gone to bed and keep the lye locked up somewhere.
Measure out your cool water and slowly add the lye crystals or pellets. The mixture will heat up. I then sit the tub in a sink of cool water, it helps it to cool down faster.
To use you want it to be ~110F 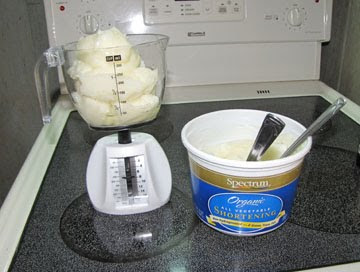 While you're waiting for your lye to cool, weigh out your other ingredients and put in a metal pan. Heat up your oils until they too reach ~110F. If you have solid fats you'll have to take the mixture beyond 110F and again wait for that to cool. The secret is getting both the lye and the oils to be the SAME temperature when you mix them together. 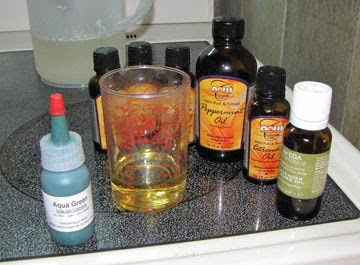 While you're waiting for your fats to melt, measure out your fragrances. Now unlike everything else, these measurements are in volume not weight. You don't have to, but I tend to add my colour to the fragrance so it's just one less thing to add. For colours I have some gel colours I bought, and i've experimented with natural colours like Paprika before too that I love using. 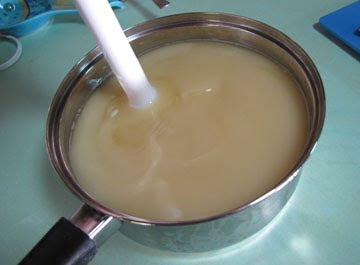 Okay - now both the lye and the oils are the same temperature. Add the lye to the oils (always in that order) and blend gently with the stick blender. The mixture will go cloudy and will start to firm up. You want to stop as soon as it reaches light pudding consistency. Which oils you use determines how long this will take. The important thing is you don't want it to firm up too quickly - this is called Seizing and makes it hard to pour. 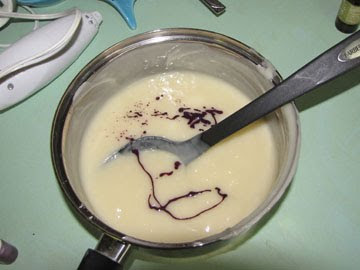 Now add your fragrance and colour (both optional) and mix in. You can use the stick blender for a more even colour, but again, you don't want it to get too firm at this point.
To make a large batch to split you need to work fast at this point, and I wouldn't recommend this until you've tried it a few times - but certainly with the "Castille Plus" recipe this is totally possible to do, as you have a while (~15 mins) before it really firms up. Decant off the required amount into a separate container and then fragrance/colour the two (or more) batches.
You can also add herbs and additives at this point. I love adding poppy seeds for exfoliation or rosemary crushed up - which I meant to in this batch and forgot! 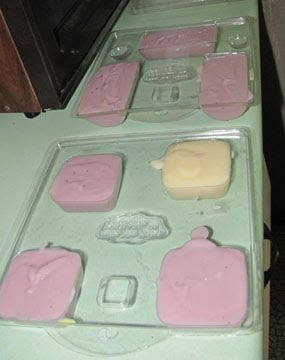 Now pour into molds. You can use many things for molds - pyrex dishes (line with wax paper though or you'll never get it out!), cardboard tubes, silicone bakeware (works excellent!) and wooden boxes with drop sides. I have these molds bought from a soap store here in Hawaii and really like them (the soaps come out really nicely, and they were ~$5 a mold). I would love to get a wooden box with drop sides at somepoint, as they insulate better (see below). 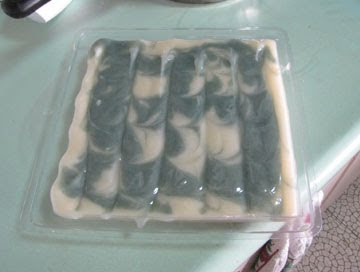 If you want to make swirls and patterns (don't try this on your first go!) you'll want a tray that will make several bars. Separate your mix and add colour to just one batch. Pour in the un-coloured and then pour in the coloured in lines on top. Take a chopstick and draw lines (make sure it touches the bottom of the mold). I haven't "perfected" this yet either! 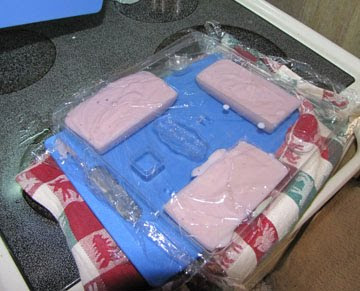 When you're poured cover with plastic wrap (this prevents soda ash forming on top), and now you want to insulate your soap - as it still has to cook some more. I layer up my soap trays using towels and cutting boards (which you'll use later). If you have a wooden box you don't need much in the way of insulation (just on top). 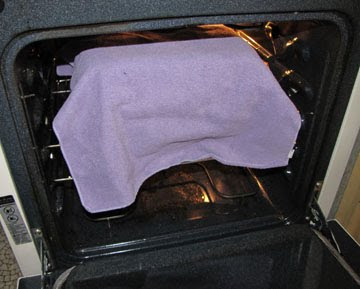 After the soap is all nice and wrapped up I put mine in the oven - mostly because my kitchen is so small there is nowhere else to put it, but it's out of the way in there. You want to keep it wrapped for ~12hrs, and in the molds for ~24-72hrs depending on how hard your mix of oils go. Don't try and unmold them until they are hard enough not to squish. I usually make soap in the evening and unwrap the next evening, then leave to dry. 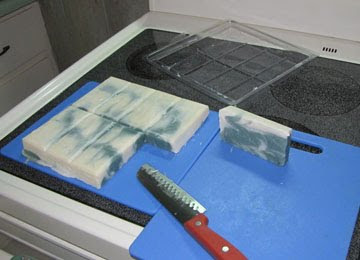 Once ready to be unmolded pop it out gently onto a cutting board. Cut the soap to the required size and trim to make nice edges at this point (it's easier to do this while the soap is soft). You also want to check at this point for any "ash" on top (white powder), as you'll want to cut that off too. Also look for pockets of oil or lye - if you have these you'll have to throw away the soap, as it'll be unuseable. The Castille Plus looks oily on top when you pop it - this is normal, but be aware this means that this soap has a shorter shelf life (~1yr - they will smell rancid when the oil goes off so you can tell) than ones that are "drier", this is just because it is so moisturizing and because there are no preservatives. 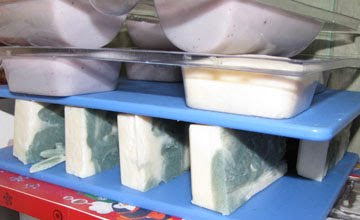 Once cut you want them to dry. Again I only have a small space, so I domino them on a cutting board (making sure they don't touch) and then stack cutting boards with all the soap on - if you are doing a couple of different "smells" you want to make sure they don't touch either as they'll cross over. Ones in molds take longer to get hard enough to pop out, but the sooner you can the quicker they will dry.
Now this is the hardest bit (at least I think so) - you have to leave these to dry for 4-6 weeks before use! You can use them earlier, but they'll be soft and won't last as long. The longer they dry the more gentle (the pH drops) they become too.
Happy Soaping!
Posted by RGW at 4:51 PM

You are amazing! After reading all of this though, I don't think I'll be doing this any time soon. I do love your soaps though.

you rock. i have to print these posts.